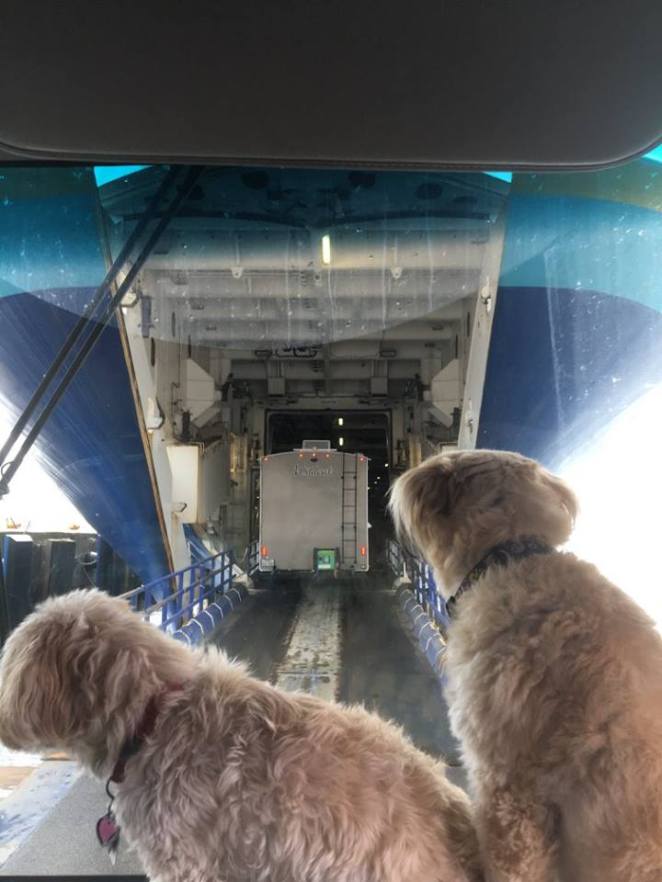 Did the same things we normally do, wind had died down but still had some kick.  Everything outside was soggy.  We made coffee and sandwiches to take along on the ferry.  We were a little apprehensive about leaving the kids in the rv for 6 to 7 hours.

We got to the ferry site with plenty of time and watched the process.  They were loading semi’s.  Huge trucks being swallowed up by the ferry.  Interesting set-up, cars, rvs, trucks all lining up and waiting to be summoned.  Then it was our turn.  We drove to what was the 3rd level and were also swallowed.  The kids watched on the front dash.  Then once on and parked we had to gather our belongings and leave our buddies.

We learned that there were three levels for passengers, level 7 was the regular level, with seating and a café, as well as a coffee shop.  Plenty of seating with windows all around.  There were also TV’s set up all around the level as well.  There was also a gift shop.  Level 8 was cabin level and level 9 was reserved seating.

We settled into seats and then I immediately went to the gift shop!  I bought two hats, a scarf, and a bracelet.  I went back to my seat to await departure.  We ate a snack and watched tv.  Then the ferry started moving.

It was ok for awhile, about an hour and a half into the trip I got up and went to the washroom.  It was a little difficult to maneuver, because there was some waving movement.  A little difficult to walk steadily.  Once in the washroom I heard a woman in the next cubicle throwing up!  I guess that was all it took for me, I was nauseous for the rest of the trip and wasn’t able to eat anything.  I napped a bit.

The thing that made it worse for me was that the coffee shop was also serving hot dogs!  Lots of them.  I had the continuous aroma of cooking wieners wafting around!

Larry and I found out that there was a tour bus on the ferry.  These seniors were from across Canada and they were touring Newfoundland.  However, at the moment, they were hung over because they had partied the night before.  Also, one of the tour participants was very sea sick.  They had to find somewhere else for her as she was really not feeling well.

When it came time to land, we were both anxious to see how Max and Maggie had fared.  As soon as they allowed us to go back to our rv, we did.  Larry opened the door and there they were!  None the worse for wear, but of course they wanted out!  Well they still had to be patient, because they wanted to get all the vehicles off as quickly as they could.  So as soon as we were off, we found a green space and let them out for a well- deserved bathroom break.  They had not had any accidents!  We were so proud of them.

Larry noticed a train sitting in a parking lot.  We went in and found it was a Heritage train museum.  Now closed, and no signs posted for no overnights.  So we stayed here.  There was a hotel behind and between us and the hotel there was a lot of green space, as well as in the center.  Across the street was a gas station and convenience store with a subway!  What more could you ask for.

Here too it had been raining and everything was soaked.  But it would be home for the night.  I went across the street to get Larry and I subs, also thinking it would be my first experience hearing the lilt of the Newfoundland accents!  I went in and purchased a few things and went to pay for them.  The girl at the counter spoke to me, but no accent!  She was from Alberta!  Then over to get our subs and there too I was disappointed to find that the girl there was not from here!  Oh well, maybe tomorrow!

We ate our late dinner, and the kids were exhausted.  Larry and I were excited to finally be in Newfoundland and also to finally see Linda and Roy.

This is a text widget. The Text Widget allows you to add text or HTML to your sidebar. You can use a text widget to display text, links, images, HTML, or a combination of these. Edit them in the Widget section of the Customizer.
Loading Comments...
Comment
×
%d bloggers like this: